Classic publishers on Retreat, Facebook and Google are rolling the market. 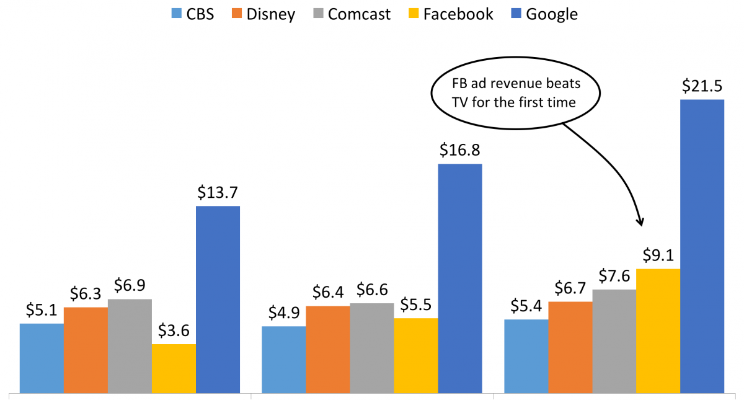 In recent years, the revenue structure of media publishers has changed. Google and Facebook take a significant amount of money from classic publishers. A clear proof is Martin Sorrella’s statement that he invests $ 7 billion from client budgets into Facebook and Google this year: https://adexchanger.com/agencies/wpp-spent-7-billion-google-facebook-year/.

A quote from the article:

NewsCorp., Twenty-First Century Fox, Sky and Foxtel all tied as the second-largest destinations for client spend.

By comparison, WPP spent between $750 million and $2 billion with traditional media owners this year, said CEO Martin Sorrell on the company’s earnings call. Just five years ago, Google was the fourth-largest destination for WPP’s media investment, and Facebook was 28th.

These are alarming numbers for the owners of “classic” media. But why is that so? Because advertising on Facebook and Google is “effective”. Both of them sell targeted advertising (= programmatic) and do not charge extra money for targeting (the price is included in the payment for space/placement). And targeted advertising brings better results for clients.

When comparing our own campaigns, investing into Facebook and Google has also been growing significantly faster than into traditional media.

Publishers do not only have to adapt to it, they have to be better to succeed, and some part of the lost has returned to them.

However, it is easy to say and difficult to do. But I will give some examples how to make it work:

1) Effect for the client foremost

Publishers, lets be honest, please. For how many of your clients are you sure you understand their goals and needs? Some customers want specific placements, others high CTR, other high visibility, other purchases on their eshop, … and what do you sell them?

Do not sell what is the easiest thing for you, sell what the clients want and reassure yourself that they are getting what they want.

The time when the campaign was set up at the beginning and the report was sent to the client at the end is gone. Set up your systems and processes so that the campaign is constantly compared with and optimized for the client’s desired goals.

3) Be transparent and apply a partnership approach

Our personal experience with Google campaigns says: “The results are usually very good, but God, I’m never sure that our client’s ad will not appear on a terrorist supporting site or fake news site.” This is very dangerous, and every brand does not want to be associated with certain content. And no account manager wants to explain his/her client why the campaign managed by the account was just realized on such sites.

Media publishers have a huge advantage of knowing exactly what content will never appear in their media and they can guarantee this advantage to their clients.

4) Do not sell your data and impressions, sell the effect

The common business model of publishers looks like this: Clients, we sell your impressions for X, targeting the region for Y, targeting sociodemo data for Z, … it’s like a puzzle.

Facebook and Google are successful just because they do not charge for data (targeting) and impressions separately. They offer everything in their bundle and actively invite clients to target as much as possible. Because a targeted campaign is more effective than the one which is not targeted. In the end, the targeted CPT campaign costs more, but it is not listed anywhere in the campaign, and the higher price is automatically calculated and the client is happy with it because he/she see a better result with such price.

Traditional media publishers have to change their attitude quickly or they are going to come to their end.

Subscribtion to New and interesting articles on the topic Programmatic

Start to receive the Newsletter Programmatic