Major Programmatic Changes and Trends in 2018

Again, we can see sudden changes and innovations such as the Ads.txt project or gradual but overwhelming market changes such as a systematic increase in Facebook revenue. We bring a selection of topics that can be most interesting for advertisers and publishers. All topics include a hyperlink to the source data and articles.

Facebook and Google continue to in beating traditional Publishers

In less than 14 years, Google has been able to get to the revenue of the same amount all publishers of print media altogether have ever achieved. Facebook alone has exceeded the amount of investment in printed media in just seven years of advertising activity.

Significant changes can also be seen from Martin Sorrell, the CEO of British WPP group. Five years ago, his company invested the largest amount of money in advertising in traditional media. Google was at the fourth place in the amount of investment, Facebook was at the twenty-eighth place. However, in 2017 Google was definitely the first choice for WPP, and Facebook has become the second most important advertising channel for the entire group.

But not everything is lost for traditional publishers. Changing approaches will not be easy or cheap, but some possibilities exist.

By the way, do you know who are the largest media owners? According to revenue, the largest media house is the parent company of Google (Alphabet). Facebook is fifth alongside the giants such as Walt Disney, Comcast and 21st Century Fox.

Another interesting chart related to Facebook accounts for the largest share in the annual growth of revenue. As JACKDAW Research Analysis shows, Facebook is also behind Google on this scale.

The annual growth of revenue of media groups in billions of dollars. Facebook has a higher annual growth than Google. Source: Salesforce.com

The rise of video ads and mobile ads

We have already got used to the fact that mobile and video ads grow even faster than everything else in online advertising. It is interesting to compare the growth of digital video and TV – According to the eMarketer in 2018, digital video will grow 5.5 times faster than television. And, of course, Facebook and Google will be the biggest sharks in the ocean again. However, other groups are doing well – for example, Impression Media was completely sold out in December and is looking for new websites.

By the way, mobile phones are the reason standing behind the huge growth of Facebook. The following chart shows that Facebook’s desktop revenue has been stable at around $ 1.22 billion a year during the last few years. However, mobile ads on Facebook yield up to 8 times more. 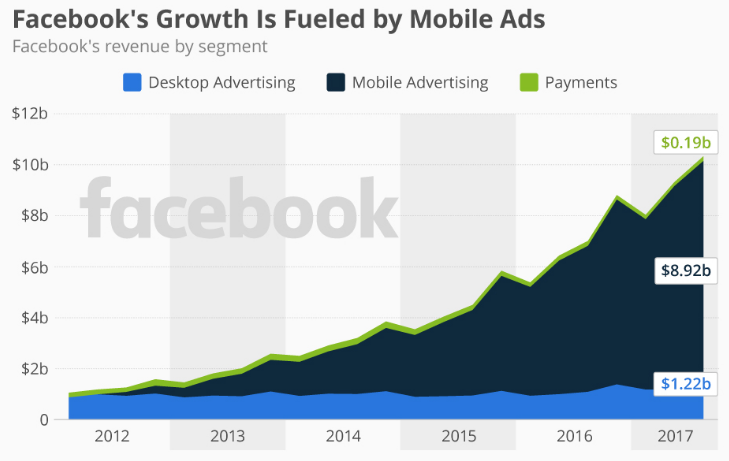 Google supports adblock in Chrome, publishers have to adapt to it

The increase in the popularity of ad blockers has inspired Google. Google claims that the best regulation is the one we ourselves make plans for and while sticking to this claim, it announced a new adblock feature in Google Chrome at the beginning of 2018. The blocker itself should be active by default and it will filter certain ad formats that users have poor experience with.

Inappropriate formats could include, for example, unsolicited advertising “pop-ups” or a video ad that plays automatically with the sound on.

Due to the clear dominance of Chrome on the browser market, all online publishers have to adapt to this new fact and they will have to come up with less invasive ways of online advertising.

The chart shows the evolution of the shares of individual web browsers on all platforms (desktop, smartphone, tablet) since 2011. Source: Andreas Gal

First-price auctions come to the forefront

Until recently, the term Second-price auctions was one of the basic concepts in the programmatic sale of advertising. However, first-price auctions are spreading very quickly with header bidding. It means that the advertiser pays the amount he/she actually bids regardless of the amount the other bidder is willing to pay.

This brings necessary changes for advertisers in the field of price optimization – especially when it comes to retargeting, it is necessary to start setting reasonable ceiling prices – see Criteo’s thoughts. And it is also a big change for publishers who can make more money the implementation of headerbidding with first-price auctions.

Fight against fraud and for more transparency with ads.txt

The online advertising market is also undergoing major changes in the area of fraud-fighting. For example, Adform recently reported the emergence of a major US-dedicated fraud network called HyphBot, Google is also developing a special series of filters to greatly help legitimate advertisers and content producers.

And the implementation of the ads.txt file has also been considerably expanding.

It is strange how quickly this activity spreads. While no one has ever been asked to implement the ads.txt before the summer holidays of 2017 (in Impression Media), all SSPs started to require it more or less strictly after the holidays.

Between September and December 2017, more than 70,000 players in the online advertising market joined the ads.txt implementation. Even in August, ads.txt was used by something over 3000 companies. For example, you can track the speed of implementation in the so-called 2017 Ads.txt Trends Report. The following chart comes from this report:

The implementation of the ads.txt file in the fourth quarter of 2017. The chart shows the number of involved subjects in particular weeks. Source: Pixalate.com

The real start of GDPR implementation is coming, the regulation will be effective as of May 25, 2018. Everybody knows about it, everybody focuses on how to deal with it

But if you are from the advertising industry and you feel that GDPR is getting on top of you, then get to know that it is much more focused on banks, insurance companies, hospitals and other institutions that handle personal data to a much greater extent than people in advertising.

From the point of view of advertising, however, ePrivacy and the form in which it will eventually be accepted is probably more crucial for us.

Subscribtion to New and interesting articles on the topic Programmatic

Start to receive the Newsletter Programmatic